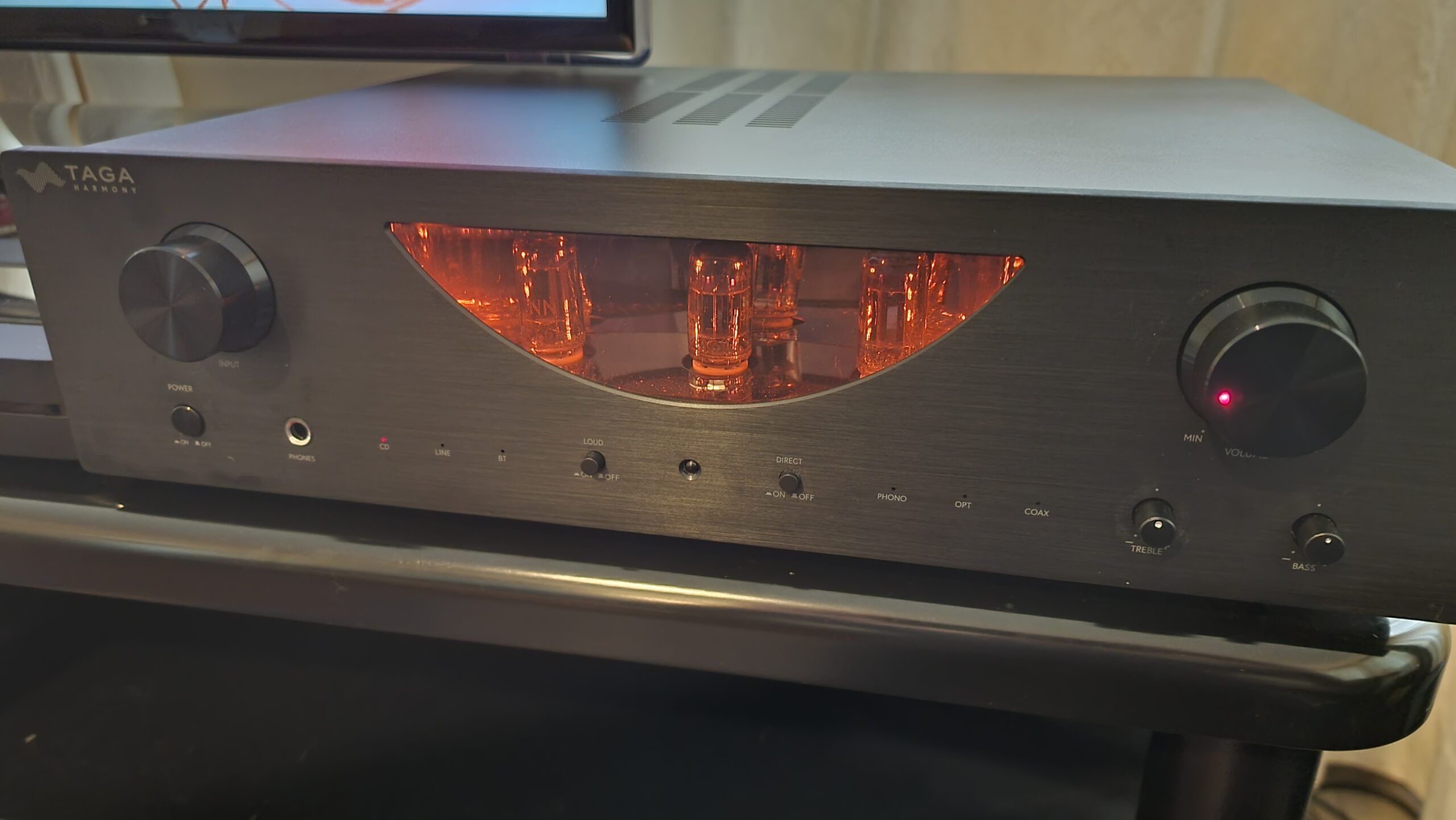 Integrated amplifiers aren’t new. I’ve owned quite a few over the many years I’ve been in audio. Hybrid amplifiers that use a mix of technologies aren’t new either, and likewise I’ve owned my share of these as well.

Hybrid integrated amplifiers that have built in DACs and other “modern” niceties are a little newer. But once again, my stalwart NuPrime IDA 16 could be considered one of these. It does after all utilise Class A and D circuitry – so it’s a hybrid of sorts – and has a rather good built in DAC. It has pretty much all the most common modern features in one chassis.

A little bit more unusual and out of left field is the Taga Harmony HTA-1000B Hybrid amplifier.

This little beauty fits into an unusual mould as it is a valve/solid state hybrid amp that also has a decent built-in DAC and throws in Bluetooth connectivity as an added extra. There are also a couple of analogue inputs for those that want to connect almost anything that has a set of RCA connectors. For those like me who enjoy spinning those plastic discs, the Taga even has a dedicated Phono input. In short, there’s not much you can’t connect to this amplifier.

The only input that I would possibly like to have seen was a USB in, but to be honest, what the amp has more than offsets what it doesn’t.

When I received the Polish-designed Taga it had already been run in, so I could get right down to doing some listening. This was after a brief warm up period, as those PsVane tubes did need a few minutes to settle down after powering up.

This warm up time gave me the opportunity to have a good look at the amplifier.

It is a good looking little beast with a quality feel to switch gear. A centrally mounted and backlit display window puts the trio of tubes up front and in your direct line of sight. I preferred the look of the amp with the backlight off. To the left is a rotary input selector and to the right the volume control. Interestingly, the LEDs that indicate which input is selected are grouped together and colour-coded. You also get bass and treble controls that can be bypassed for best sound quality via the Direct button, as well as a Loudness button.

Also worth mentioning is the neat and solid all metal remote control and the well laid out rear connector panel of the amp.

Listening kicked off with me listening to the amp in Direct mode, bypassing bass and treble controls and with Loudness off. My initial source was my personal DAC plugged into one of the Taga’s analogue inputs. I did this to set a baseline so that I could compare the sound of a DAC that sells for more than the cost of the Taga, to its own internal DAC.

What I heard was immediately pleasing, in what I could probably best describe as a typical valve-type sound. From the outset it was clear that this was an amp that I could listen to for long periods of time with very little listening fatigue. Bass could have had more pace and precision, while vocals and tops could also have done with a little more detail. Imaging, while good, could have been a little better, but everything remained enjoyable to listen to.

In this guise I would describe the Taga as a ‘listenerphile’ amp as opposed to an audiophile one. I suppose at this point I should explain the above statement.

In my experience, many a so-called audiophile amplifier is not the easiest device to listen to. These models tend to put on their lab coats, analyse the music they’re being asked to play and take great glee in exposing any flaw in the recording. Sure, they sound great when being fed with the best of recordings, and control speaker motion like they were connected as a piston is to a crankshaft. But feed them anything less than perfection and they look at you with disdain.

A listenerphile amplifier may not be able to deliver quite the pin-point precision or pace, but instead of donning a lab coat starched pure white and ironed so well that you could cut your hand on a crease, it puts on a pair of baggies and slops and tells you to chill and listen to the music, dude…

The next input I tried was the Taga’s optical digital input connected to my NuPrime WR-100 streamer. With the streamer connected I could play the same music on both analogue input (via my DAC) and the Taga’s internal DAC. And then once level-matched, I could switch between the two inputs. What this revealed was that the internal DAC was indeed rather good. It couldn’t quite match my DAC in overall tonal presentation, but the differences were minimal and only really discernible when switching from one to the other. Considering the price of the Taga I once again have no complaints about its DAC performance.

As the Taga has Bluetooth, I gave this part of the amp a whirl as well. Here my phone connected easily to the amp and the functionality of being able to play any music from my phone, or indeed those of a few other people who listened to the amp while I had it, was appreciated. Bluetooth sound was, if I’m being critical, just half a notch below the rest of the amp’s performance. But I was happy that the option was there in the first place, as it adds to the overall user experience of the amp.

Of course being one of those people who still cling to old sonic technology, I hooked my turntable up to the Taga’s phonon input. This sounded surprisingly good and it was clear to me that this part of the design circuitry wasn’t merely an afterthought to add to a features list. My cartridge, a high output MC model, has a relatively low output. This translated in the phono input not quite having as much gain as I would like with the result that I couldn’t quite get the best out of the amp dynamically. This says more about the low output of my cart than the phono stage of the amp, though. I’m sure that with a more conventional MM cartridge, you would really be able to enjoy the Phono side of the amp.

With the bulk of my review out the way I popped the lid off the amp and fitted the NOS RCA tubes that I had been supplied with as an alternative to the tubes fitted as standard to the amp.
With tubes swapped and the amp given a few hours to settle in to its new valves, I sat down with pretty much the same playlist I used initially.

I was surprised at just how different the Taga sounded – everything had tightened up quite a bit and the amp moved quite a big step towards the audiophile side. It still kept the ability to make music enjoyable, or even more so in fact, since I could hear more detail in the music. The amp had traded its baggies and slops for chinos and a golf shirt. Not quite as relaxed, but not audiophool formal either.

My audiophile friends may feel that the Taga HTA-1000B is just a little bit on the lush and warm side of audio life, even with the added benefit of better tubes. And I agree with them to a degree. My non-audiophile friends just loved the music and to hell with the audiophile-induced neuroses about pace, rhythm, timing and all those other attributes we audiophools ascribe to, and I agree with these people too.

That I can agree with both sets of people means that the Taga must be doing something right as far as playing music is concerned. You can criticise it if you want to, but why? What you can’t criticise is its overall value in that it offers so much for relatively little in today’s higher end audio terms. Tube rollers will like the ability to “tune” the sound and those that enjoy ease of use will love that they can simply hook up a phone and play their favourite music.

Recently Will and Hugo got into a Bentley Continental GT Speed fitted with the top of the range optional extra [...]